By now, you have likely read or watched the news reports of the horrors that took place at Cricket Hollow Animal Park near Manchester. On December 9, following a lengthy court battle lead by the Animal Legal Defense Fund, we were part of a team who traveled to Manchester to rescue the animals who lived in the so-called “zoo.”

A Scene to Never be Forgotten

When our team went to Cricket Hollow to help recover these poor souls, we were not fully prepared for the scene that awaited us. To be honest, there is really no way that any person on Earth could have been adequately prepared to see that nightmare. Dead animals lay decaying as others stood starving in the very same cages. No food was in sight and water bowls were empty or frozen solid. The property was overrun with debris and death.

And then there was the cow pasture… It was the size of a basketball court, piled several feet tall with deceased animal carcasses — one on top of another — in different stages of decomposition. Skulls, legs and various body parts protruded from the mound that looked like a hill from afar.

On top of the mound was a newborn calf. The calf likely died during the birthing process and was found decaying, still partially in his mother’s placental sac. Nearby, the his mother lay dying in the pasture. We tried desperately to save her, but were legally prevented from providing lifesaving care as she was not considered one of the animals included in the “zoo.”

The nightmare of Cricket Hollow will haunt my dreams forever, but I have some small relief. Amidst the tragedy, more than 400 animals were saved that week. Of those rescued souls, were Odin and Freya. The two peaceful sheep now call Hercules’ Haven home.

We are angry about what happened to the animals at Cricket Hollow and pray that their torturers will be held accountable. But, now it is time to turn anger into action. Odin and Freya are our priority. We may not know details of the horrors they endured, but we have been able to learn part of their story. Veterinarians have been able to determine that Odin is roughly four-years-old and Freya is one. We must interpret from what we know that both suffered at the “zoo” for their entire lives up to this point. This is hard to think about, even harder to imagine.

We know that Freya and Odin were starved as evidenced by their emaciated bodies. They never knew when water would come, or if their friends would survive from one day to the next. We know that in this place of torture, animals of prey were housed next to predators. Imagine being a goat or pig, living next to starving grizzly bears. This was torture for the goats and pigs just as much as the starving grizzly bear.

Much like children who suffer from neglect, the effects of what Odin and Freya endured will stay with them their entire lives. Our volunteers at Hercules’ Haven have worked tirelessly to care for Freya and Odin as they recover physically and mentally from what they endured.

Our job moving forward with Freya and Odin will be difficult. We believe these beautiful souls are suffering from PTSD (Post-traumatic stress disorder), a disorder most commonly diagnosed in humans. PTSD is a mental health condition triggered by a terrifying event. Symptoms may include flashbacks, nightmares and severe anxiety, as well as uncontrollable thoughts about the event. Both Freya and Odin have severe anxiety and are triggered by anyone moving quickly around them.

We are working hard to help Freya and Odin to recover. Volunteers spend hours each day simply sitting with them. They talk with them, sing to them, and read to them. No one is allowed to touch them as they currently fear all humans.

Whatever interaction with humans Freya and Odin have moving forward will be on their terms. Life on their terms means they eat till they are full, they rest when they want, they feel safe at all times, and if someday they want human touch we will be present and willing to offer that. Until then, we will hold steadfast in our mission to help them feel safe and secure in their new home. Food will be in abundance and love will be endless.

We are asked frequently, what difference does it make to save one or two animals? It means everything to the ones we are able to save. 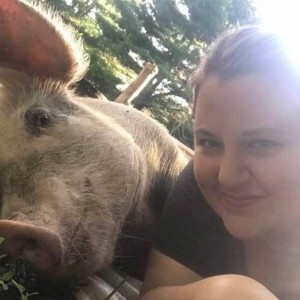 Alison is the co-founder of Hercules' Haven. She along with her husband and fellow co-founder, Danny, had a dream to live on a farm surrounded by animals. Soon after moving to their first farm, Alison found two mini-pigs. One of those pigs was our namesake, Hercules. Goats and mini-horse arrived soon after and the rest is history.
PrevPrevious
NextNext

Stories from the Haven

Hercules’ Haven chose as participant for The Gazette Gives Back Program

You did it! You helped Hercules’ Haven cross the 2020 finish line

You did it! You helped Hercules’ Haven cross the 2020 finish line. Happy New Year to You, friends, fans, supporters, and volunteers. You were with

Send us a note to learn more about Hercules’ Haven.

Subscribe to our newsletter and learn more about Hercules’ Haven.

Hercules’ Haven has been chosen as a participant for The Gazette Gives Back Program for 2022. Learn More & Vote for us!